LandAid and fund manager Frogmore have launched London’s first taxi that can be coloured in. The taxi, which was unveiled on Thursday, will raise awareness of LandAid’s work tackling youth homelessness whilst also being a unique piece of public art.

The taxi livery, donated by Frogmore, is completely covered with illustrations of the projects and young people that LandAid supports. Playing on the increasingly popular trend for adult colouring books, customers will be offered felt-tip pens with which they can colour in sections of the cab. The Colour-in Cab was designed by the iconic Steve Edge (working alongside advertising agency Mr President) and illustrated by upcoming artist Clara Bacou.

From Thursday the striking vehicle will take LandAid’s message across the city, bringing a welcome splash of colour and fun to London’s streets. LandAid is encouraging the public to help raise awareness of the charity’s work by posting selfies with the taxi on Twitter using the hashtag #ColourInCab. Businesses too can get involved in the project by hiring the vehicle for their corporate events and away days.

LandAid, which is celebrating its 30th anniversary in 2016/17, hopes the Colour-in Cab will make people think about the wider issue of youth homelessness in the UK. The charity anticipates that the cab will be fully coloured-in by March 2017, in time for the end of its anniversary year.

Paul Morrish, Chief Executive of LandAid, said: “The Colour-in Cab will be a completely unique addition to London’s streets. We are so grateful to our friends at Frogmore for their generous sponsorship and to the brilliant Edge Design for coming up with this amazing idea. In addition to the taxi’s eye-catching design, we hope the jaw-dropping fact that over 80,000 young people experience homelessness every year will be just as memorable. Homelessness is a blight on the lives of each of those young people, and LandAid is determined to do what it can to help. Follow us, like us, get involved and make a difference.”

Jo Allen, Chief Executive of Frogmore, said: “As one of LandAid’s growing number of Foundation Partners, Frogmore is proud to support the great work of the charity and its objective of ending youth homelessness. We hope the taxi livery will raise awareness and, as such, be a fitting celebration of LandAid’s achievements over the past 30 years.”

Steve Edge, Founder of Edge Design, said: “I grew up with magic markers, plastic scissors and glitter; which always made me very happy! I think this project is about creating something incredibly fun that will bring people together from all walks of life, while spreading awareness of such a serious cause in London.” 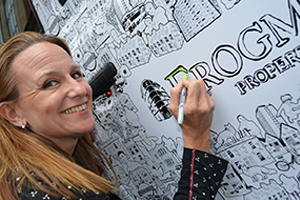 Jo Allen colouring in the cab 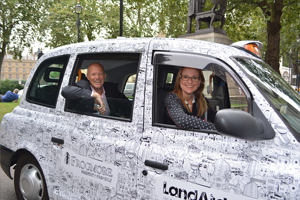